In recent news for CERN, the world’s largest nuclear and particle physics laboratory. They have now signed India to become an associate member of the European organization. India had “observer” status until September last year, when the CERN council adopted a resolution increasing its position. In the past few years, Indian scientists have been involved in several experiments at CERN. India made contributions to the construction of the Large Hadron Collider. Indian scientists also played a significant role in the Compact Muon Boson experiments, which is one of the two experiments that triggered the discovery of the Higgs Boson.

The discovery of the Higgs Boson in 2012 at the Large Hadron Collider at CERN showed the world a new way in understanding the universe. By 2016, the LHC produced about the same number of collisions it did in all its previous years combined. At its current rate, it produces about a Higgs a second. US scientists, with international partners are trying to develop upgrades for a high-luminosity LHC, that would provide 10 times the collisions. This would launch a new area of physics, it would start an era of high-precision Higgs Boson physics. Their progress this year has been outstanding. They have created a successful prototype, this could lead to the strongest accelerator magnet ever created.

Currently, theoreticians aren’t truly necessary in this new category of physics. With the discovery of the Higgs, there’s been a change. Instead of creating new theories, experiments are looking for more evidence to support already exposed theories. Whenever something new is found, theorists try to explain and make sense of it. Michelangelo Mangano, a theoretical physicist who works within experimental physics says, “It’s like when you go mushroom hunting. You spend all of you time looking and at the end of the day you may find nothing. Here it’s the same, there’s a lot of wasted energy but it doesn’t lead to much. But occasionally you can find a little gold nugget, a perfect mushroom.” After the discovery of the Higgs we thought we knew all the Standard Model, but “many physicists were optimistic about finding new anomalies.”(Harriet Jarlett, CERN). 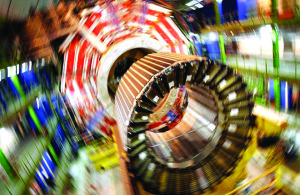 This is a great day for science and the world! After 50 years of searching, thanks to the largest and most complex machine ever built (the LHC) and the dated and de-commissioned Tevatron collider at Fermilab (where I have visited many times), we are 99.9% sure the god particle has been found.  However, there is still a lot to learn about the particle from analyzing previous collision data and from more LHC collisions scheduled later this year.  Some caution is needed as there is a remote chance that this is a new unexpected particle and not the god particle.
The mass region around 126GeV is the magic number.  This is not very far away from recent predictions.  A full detailed report will be released at the end of July.  I would expect that in early July of 2013 we will have a full confirmation announced with many more details provided about the particle’s characteristics.  As in most scientific discoveries, a major discovery only leads to more unanswered questions and this will be the case with the god particle.
We will cover what this finding means to mass and gravity and what we still need to find out in an upcoming post….

It is July 3rd and we all wait in anticipation of the July 4th announcement from CERN that evidence for the god particle has been discovered. What I am hearing from insiders is that the announcement will disclose that the god particle has “very likely” been found. There are two sets of data that point to its finding, but neither separately meet the high test criteria to mark it definitive.

On a side note: I have only one gripe about the timing of the announcement. It is going to be the early morning hours of July 4th in the US. This is a very slow news day in the US, so won’t get much coverage at all. This could have been done on a different day and at a time that would catch the early morning news cycle live in the US and afternoon cycle in Europe. All big scientific discoveries should be rolled out with great fanfare and this is not being done. I see the announcement of finding the god particle as great way to spark an interest in science from upcoming generations and this does little to start that fire, especially with the timing in the US where mainstream interest in science is almost non-existent. I will be watching the media sources in the US to see if it even makes it on the front page.

WHAT IS THE GOD PARTICLE?

Higgs boson is a hypothetical elementary particle predicted to exist by the Standard Model of particle physics. It is the only Standard Model particle not yet observed. An experimental observation of it would help to explain how otherwise massless elementary particles cause matter to have mass. If it exists, the Higgs boson is an integral and pervasive component of the material world.

As of August 2011, the Higgs boson has yet to be confirmed experimentally,despite large efforts invested in accelerator experiments at Large Hadron Collider (LHC) at CERN and Fermilab.  The Higgs mechanism, which gives mass to vector bosons, was theorized in August 1964 by François Englert and Robert Brout (“boson scalaire”);in October of the same year by Peter Higgs, working from the ideas of Philip Anderson; and independently by Gerald Guralnik, C. R. Hagen, and Tom Kibble, who worked out the results by the spring of 1963. The three papers written on this discovery by Guralnik, Hagen, Kibble, Higgs, Brout, and Englert were each recognized as milestone papers by Physical Review Letters 50th anniversary celebration.

How is Higgs boson important?

It plays a key role in the standard model of physics (the theory on which physicists base their whole understanding of matter), proving the existence or absence of the Higgs boson could change the entire foundation of physics, indicating the existence of particles and forces not yet imagined and paving the way for an entirely new set of laws.

“The Higgs boson is interesting because it is the only reasonable explanation we have for the origin of mass,” says Dave Rainwater, a researcher at FermiLab. “Without the Higgs, all fundamental particles would be massless, and the universe would be very different. The weak nuclear forces wouldn’t be weak at all, for instance, so the elemental composition of the cosmos would be radically different, stars would shine differently, and we probably wouldn’t exist.”

And the payoff for whoever discovers the Higgs boson? Nothing less than a Nobel Prize. “Its discovery would be one of the crowning achievements of modern science, and validate decades of intense research,” says John Conway, a professor at Rutgers

Why does the ‘God Particle’ matter?

The answer is actually in the question.  The God Particle, or Higgs Boson as it is scientifically referred to, is a hypothetical particle which physicists believe gives atomic particles, and as a result everything else, mass.  Physicists across the globe are conducting experiments to try and prove  it’s existence.  Right now, nobody knows why particles acquire mass, and that is a hole that has existed in the standard model for 50 years.

In the 1960s several groups of physicists, including Peter Higgs, separately came up with the complicated idea of how particles acquire mass. A field, now knows as the Higgs Field, is thought to interact with the Higgs boson. It is in this interaction where particles are believed to acquire mass. This is kind of important since without this interaction science can’t accurately explain why the galaxy is what it is. And as explained in a briefing paper from CERN, “The universe would be a very different place…. no ordinary matter as we know it, no chemistry, no biology, and no people”.

So science shall hunt for the Higgs boson as it fills a hole and helps reinforce the standard model for particle physics. It will show that physicists are on the right track. The answer, if it is proven correct will finally tell physicists why particles have mass.  Which tells them why these particles come together to create atoms, which in turn creates matter.

How is the God Particle found?

In very simple terms, physicists have to break stuff to find stuff. They get to use the scientific principles of a 2 year old toddler and smash things together to see what comes off…..albeit in a much more controlled environment.

Particle physicists have a fun job. Sure they are dealing with some very heady principles, and are trying to prove what has been postulated after years of thought experiments and enough math to make an intelligent person go insane, but ultimately they are trying to break things to find the smallest parts that they can. They use real big tools to do it too. The most famous is the Large Hadron Collider (LHC) built at CERN in Geneva, Switzerland (well part of it is in France as well) is an underground ring measuring 17 miles in circumference.  It’s designed to take two opposing beams of particles, accelerate them to just under the speed of light and smash them into each other. These collisions, although small, are very powerful.  The explosions are aimed to occur within very large detectors that try to capture the evidence of subatomic particle, which decay very quickly.

As you might imagine these are not experiments that can be conducted inside university labs due to the size of the tools and the cost to operate them. Consider that the entire 17 mile ring is lined with very expensive super conducting magnets each kept just above absolute zero, and the energy needed to accelerate the beams to near the speed of light, that these are not tests to be conducted on a shoestring budget.  The LHC had a construction budget of over 7 billion euros, which makes it one of the most expensive machines ever constructed.

So using these big expensive machines, top particle physicists break stuff in the hopes that what falls out can be identified to help explain the questions of the universe. Simple and heady.